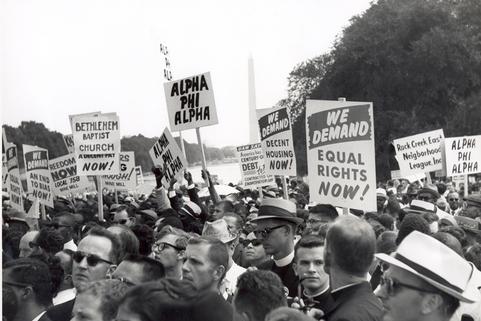 We claim the following firsts:

Since its founding on December 4, 1906, Alpha Phi Alpha Fraternity Inc. has supplied voice and vision to the struggle of African-Americans and people of color around the world.

The Fraternity initially served as a study and support group for minority students who faced racial prejudice, both educationally and socially, at Cornell. The Jewel founders and early leaders of the Fraternity succeeded in laying a firm foundation for Alpha Phi Alpha's principles of scholarship, fellowship, good character, and the uplifting of humanity.

Alpha Phi Alpha chapters were established at other colleges and universities, many of them historically black institutions, soon after the    founding at Cornell. The first Alumni Chapter was established in 1911. While continuing to stress academic excellence among its members, Alpha also recognized the need to help correct the educational, economic, political, and social injustices faced by African-Americans.  Alpha Phi Alpha has long stood at the forefront of the African-American community's fight for civil rights through leaders such as: W.E.B. DuBois, Adam Clayton Powell, Jr., Edward Brooke, Martin Luther King, Jr., Thurgood Marshall, Andrew Young, William Gray, Paul Robeson, and many others. True to its form as the “First of Firsts,” Alpha Phi Alpha has been interracial since 1945.

The effort to organize Beta Lambda Chapter at Kansas City, Missouri began in April 1918.  It was launched in response to the request of the graduate members of the fraternity who were gathered in this city.  Brothers T.C. Brown, W.H. Bruce, L.H. Norwood, Thomas Taylor, J. Oliver Morrison (brother of past General President Moses Alvin Morrison), and Guy Booker made application to the convention of 1918 held in Cleveland Ohio.

Since its inception, Beta Lambda, and our BLEI foundation, have shown leadership in service, social justice, education and development of mankind.